ILs are generally defined as salts with melting points below 100 oC whose melts are composed of discrete ions. ILs are not necessarily new materials, examples have been known for over 100 years, but have gained renewed attention over the last 20 years, particularly from 1995 onwards. This was first due to efforts by the United States Air Force in applying ILs as electrolytes, and then as a result of suggestions that ILs have unique properties as replacements of conventional solvents.  However, it is now being realized that it is rather the unique properties set, unattainable from molecular compounds or crystalline salts, that render ILs as exceptional materials and brings them under more intense scrutiny. The non-volatility, thermal stability, and large liquid ranges achievable with many ILs, have proven to be important drivers for research and technology enablers, supporting numerous advances beyond the initial investigations of ILs as liquid electrolytes and solvent replacements.  Examples include: thermal fluids; lubricants; processing of cellulose; biphasic chemical processes (e.g., BASF’s BASIL® process); photovoltaics; fuel cell electrolytes; non-volatile liquids, high energy density materials (aka “energetic liquids”). 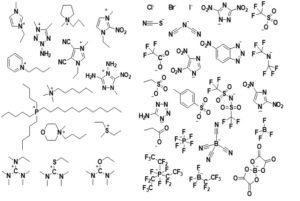 The intense scrutiny that ILs have received has led to an explosion in the number of new ion classes known to support IL behavior. These include the well-recognized azolium cations, as well as many new cation classes. Anions comprise both a wide variety of inorganic anions, such as halide and sulfate, and an ever increasing number of organic anions (e.g., alkylsulfates, carboxylates). Many ILs display wide liquidus ranges, high decomposition temperatures, non-volatility, and controllable solvent properties that can be easily modified by changing the ionic components of the liquid. Tremendous progress has been made using ILs in separation science, catalysis, chemical synthesis, electrodeposition, lubrication, processing of cellulose, gas caption, storage and delivery. However, compared to other research efforts, ILs have been widely neglected as a medium for syntheses in inorganic and materials chemistry.