Chemistry for a Sustainable Future 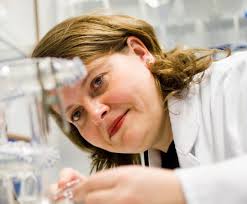 at the College of Agriculture, Engineering and Science in Pietermartizburg, South Africa. She is currently serving as Editor-in-Chief “Green Chemistry Letters and Reviews” (Taylor & Francis) and on the Editorial Advisory Board of ACS Sustainable Chemistry & Engineering. She has been a long-term Associate Editor for the journal  “Crystal Growth & Design” (ACS Publications).

Prof. Anja-Verena Mudring studied chemistry at the Friedrich Wilhelms Universität in Bonn, Germany, and carried out her doctoral thesis work at the Max-Planck Institute for Solid State Research in Stuttgart, Germany. 2001-2003 she worked as a Feodor-Lynen fellow at the Ames Laboratory, a US Department of Energy National Laboratory. In spring 2003 she started her independent scientific career as a Liebig fellow at the Universität zu Köln. After having completed her habilitation in 2006, she moved to the Ruhr-Universität Bochum, Germany, where she headed the Materials Synthesis and Characterization group and became Chair of Inorganic Chemistry III. At RUB she also led the interdisciplinary Research Department Interfacial Systems Chemistry. During that time she established a EU-Marie Curie Training network on luminescent materials (LUMINET) and founded a COST action on ionic liquids (EXIL). In 2013 she accepted the offer as the Glenn Murphy Professor in the Materials Science and Engineering Department at Iowa State University and was the strategic hire for the Critical Materials Institute, a US DOE Energy Innovation Hub, led by the Ames Laboratory.

Prof. Mudring has organized a number of national and international conferences, most recently the  2020 Symposium on Green Chemistry in Stockholm. In 2019 she held the Terrae Rarae, an international conference dedicated to rare earth elements in Stockholm & Helsinki. Before that she had co-organized the 2017 Rare Earth Research Conference (RERC) in Ames, Iowa, USA. In 2016 she was Chair of the Gordon Conference on Ionic Liquids and organized the 2019 Terrae Rarae Conference on f-elements in Stockholm (Sweden) and Helsinki (Finland).

She has received numerous awards and fellowships , many in the field of green technologies, but also fundamental research, such as the H.C. Starck award in solid state science from the GDCh, was a Feodor Lynen Fellow and held a Humboldt fellowship from the Polish Science Foundation (FNP). She was elected Fellow of the Royal Society of Chemistry in 2008. Her research has been sponsored by the ERC through two grants, the European Commission, the DFG (German Science Foundation), DOE (US Department of Energy) and NSF (US National Science Foundation) as well as industry. She is currently receiving support from the Vetenskapsraadet (VR, Swedish Research Council),  SSF (Swedish Foundation for Strategic Research), Energimyndigheten (the Swedish Energy Agency), the Knut and Alice Wallenberg Foundation, the Carl Tryggers Foundation and the Wenner Gren Foundation. Most notably, she has received the Göran Gustafsson prize in Chemistry 2017 given out by the Royal Swedish Academy of Science for her pioneering research of ionic liquids.